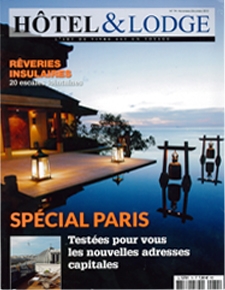 To decorate the 123 Sebastopol, new 4-star hotel on the Grands Boulevards in Paris, Philippe Maidenberg, architect and interior designer, played with the complicity of leading cinema figures: Jean-Paul Belmondo, Claude Lelouch, Danièle Thompson, Agnès Jaoui, Jean-Pierre Bacri, Elsa Zylberstein and Ennio Morricone. Each projected their own world on their own floor, writing the script of their lives. To ‘Bébel’, the macho thing, boxing. To Elsa, the mirrors, the furs… As for the public areas, bar, lobby, restaurant, they remind of a cinema hall, the stair with its red carpet covered in laurels reminds of the Cannes Festival. 63 bedrooms, from 280€.