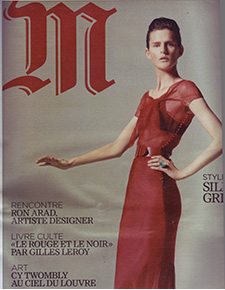 The Night of Design

Their names? Joyce, Jules, Recamier, Fontaines du Luxembourg, Petit Paris. Their addresses? Given through word-of-mouth. Their customers? Those for which a hotel is above all a house that cannot be conceived without a soul. And this new phenomenon bears fruit as discreet stars, provincial notables or high net worth people from the Emirates, tired of the flamboyant abundance from the grandest luxury hotels, attend them more and more. It says it all. Of course here, the service is not the one of a 5-star. So what? Other criteria compensate this apparent lack – charm, discretion, intimacy, and a way to make you believe that you are somewhere else while being home once you passed the front door.

The reasons of this delicious change of scene? A familiar object, a singular fragrance, a light, a hearth fire, a designer’s piece of furniture, the color of a fabric. Farewell then to the tasteful monochrome, the perpetual beige-grege-white triptych, the minimalist, clinical and functional furniture, the aseptic lights of the big hotel chains. Welcome to color, psychedelic patterns and designers furniture. Here, emotions prevails over the hype, the detail over the cliché, the Bohemian feel over the politically correct.

To follow this new philosophy, the decoration has been entrusted to the the flower of today’s interior design. Not necessarily Jacques Garcia, Pierre-Yves Rochon, Ed Tuttle, Didier Gomez, Alberto Pinto… But the others, the rising stars – Sybille de Margerie, Tristan Auer, Fabrice Ausset, Jean-Louis Demot… The relief, in a way! These young and trendy designers bank on other criteria – poetry, memory, nerve… To attract new customers without turning off the regulars. “The idea is to offer a sort of discovery, another type of stay, an experience without pretension” says Fabrice Ausset, decorator of the Fontaines du Luxembourg, in Paris.

Up to the decorators then to give meaning to the patina of a wall, the texture of a material, a fabric, to work with the best artisans, to bargain-hunt the objects or draw furniture that fit into an epoch. In a word, to avoid the total look. “I favored a private feel for the place”,says Jean-Louis Deniot, decorator of the Racamier in Paris. “The hotel is designed like a private city house.” In a nutshell, decorators put in as much passion as if they created a 5-star hotel. Even better, their own house. “The danger is to fall in the historical reconstitution and the pastiche”, says Sybille de Margerie, decorator of the Petit Paris, a hotel in the 5th arrondissement where the latest creations of Lehevre or Pierre Frey stand alongside the bespoke contemporary furniture and pictures of Paris by Roman.

In most of these new hotels, the rooms are often confined and the bathrooms drawned perfectly straight. For this, there is no alternative – demolish and rebuild entirely. In concrete terms, it means to change the volumes, rework the lights, add a small breakfast room where there is not often a restaurant room – a secondary detail considering these hotels are mostly located in neighborhoods with lots of good restaurants. However, all of today’s high tech paraphernalia is there. They may have a few stars less than luxury hotels, the services are top-notch – air conditioning, wifi access, room service, gym and sometimes massage, and an attention to energy savings, like the Joyce Hotel, in Paris, which uses low consumption light bulbs, equips its taps with devices that limit the flow of water, and offers organic breakfasts.

But the secret of these new places also lies in the very particular relation between owner and decorator, to whom they generally give carte blanche. And Philippe Maidenberg, decorator of the Joyce, confirms it: “It is undoubtedly the most personal hotel I have designed” he says. “I have always had a very strong complicity with my client. We have worked together for fifteen years.” So it is normal then that there are good vibes on these establishments that are treated as personal stories. “Each project is different”, says Sybille de Margerie. “Each site is unique. It is all a bit like haute couture.”

[…] [One finds a] sense of cross-breeding in the Joyce Hotel (Astotel group) situated rue La Bruyère in the 9th arrondissement. Facing the reception desk made of Eiffel towers designed by the hotel’s architect Philippe Maidenberg – who studied with Ieoh Ming Pei for the Grand Louvre renovation), a long padded seat in white leather stands alongside a 1960’s clock by George Nelson manufactured by Vitra, an African armchair by Cheick Diallo, a parquet lighted with fiber optics. “It was a complete refurbishment” admits the decorator. “The decoration however, I would say it is made on the inspiration of the moment.”

Despite that, harmony is at the heart of the subtle demonstration where nothing is trivial. In the breakfast room lightened by a glass roof, old cars’ seats face totally new Thonet armchairs, the walls are decorated with leaning mirrors, just to lose balance, and the great cloud-shaped chandelier -by Vialuce- adorns the whole with an opalescent light. Same sense of detail for the 44 rooms on which blows the spirit of Fornaseti and whose furniture is made by Patricia Urquiola or Philippe Starck. Passionate with couture, music and theater, Philippe Maidenberg even took inspiration from one of his Prince of Wales-patterned trousers to design the carpet. […]