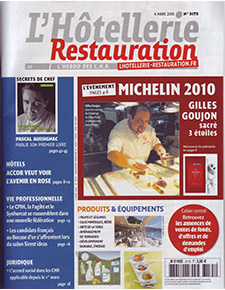 March 2010. “Our job could be compared to what a film director does” says interior designer Jean-Philippe Nuel. His colleague Philippe Maidenberg then adds “a form of staging indeed but always within technical regulations”.  Nevertheless, creativity remains their first quality. They truly are today’s trend makers in the hotel business. “Nothing is ever that definite, says Laurent Moreau, but it seems like light colours are the trend at the moment in renovation work”. Some recent works were designed by Carole Picard for the Asset Management Group, such as “Le BLC” in the 11th arrondissement of Paris, where everything is white.

Beyond the question of colours and material, some would rather talk about space and organisation. “The real trend at the moment in renovation work is reorganising space Jean-Philippe Nuel claims. There is a parallel between daily life and life in a hotel so I try to transpose it when I work on the layout of a building”.  On the other hand, the aesthetic aspect of our work is important but it is only the tip of the iceberg: “20% of our work, Laurent Moreau reckons”. Regulations are more and more important whether environmental or related to security or accessibility. Moreover, communication between different administrations makes the architect’s work even more difficult. “Regulations regarding the environment – such as the HQE – is something we all follow and respect and all buildings are supposed to be carbon free, underlines Jean-Philippe Nuel. But it can get tricky when we don’t renovate the entire building to take into account certain aspects of those regulations such as saving water, energy, garbage…”.

“The most important constraints are the accessibility requirements as we’re often asked to go beyond regulation” says Philippe Maidenberg. How is it possible to open 90 cm doors in a concrete building to follow regulation?
Special dispensations can be granted but there are no guarantees. The insurance policies architects subscribe to often keep them away from such problems and architects often ask for advice from independent control boards. Another frustration point for interior designers is the question of lights. Because of the new regulations, hotels need a certain amount of lux, light power, per square meter. Once again, some will do the testing by themselves with the use of specific tools where others will prefer an expert’s opinion. But all agree with Christine Gero when she claims that “hotels are all about the atmosphere and too much light can spoil that atmosphere”. And even though LED lights are everywhere now, they have two weak points: they don’t have enough light power and are still expensive. And that’s without considering the difficulty of recycling these energy-saving lamps.

But in the end what is more daring for an architect than refurbishing an old building to give it another function? When an old prison, empty courthouse or abandoned hospital is turned into a hotel, the architects from Bâtiments de France (Buildings of France) are the ones to contact.

In Nantes for the transformation of the old courthouse into a Radisson hotel “there weren’t that many problems, says Jean-Philippe Nuel, because the building was from the 19th century whereas for the Hôtel-Dieu in Marseilles, built during the 18th century, we had to keep the staircase and the front of the building.” These renovations are often very costly but “the important part is to know what we will put inside, acknowledges Laurent Moreau.” For a 3 or 4 star hotel with a 50 to 100 bedroom capacity, a complete renovation – including the plumbing, bathrooms, space organisation, interior design, security, accessibility and decoration – would cost between 70.000 and 100.000 euros per room (120.000 € for a 4 star hotel) the five architects agree. Without their fees.

Of course, it’s a lot less when it’s eco-chic. “The worst uncertainty for us as far as renovation is concerned says Jean-Philippe Nuel, are the floors and the floor surfaces. We must always anticipate with another specific cost estimation we might have to use.” Interior designers are all about adjustments as well as creating living spaces. Their purpose is to sublimate the hotel’s wishes while sticking to its needs and respecting the establishment’s vocation. They are also the necessary guarantors to avoid any catastrophe due to heavy works.