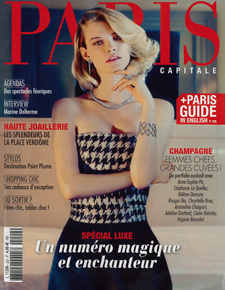 Just opposite the Gaite Lyrique, this new 4 star hotel in the Boulevard Sebastopol declares its love for cinema. The reception desk reminds an American box office, the entrance wall with its hand casts – a wink at the Hollywood stars – set the tone wanted by hotel architect and interior designer Philippe Maidenberg. Over 6 floors, the sixty three rooms have been refurbished with the complicity of leading actors. Jean-Paul Belmondo, Claude Lelouch, Danièle Thompson, the Agnès Jaoui and Jean-Pierre Bacri duo, Elsa Zylberstein and Ennio Morricone have all played the game and given a bit of their intimacy. A punching ball next to an espalier stands as a headboard and a bedspread reminds of a boxer’s robe in the Belmondo bedrooms. In the Lelouch bedrooms, the scenery is made of black and white film roll, and a reel as a bedside table. Chairs from Danièle Thompson’s latest film, Des gens qui s’embrassent, can be found in one of her rooms. Special mention for the 424, dedicated to La Boom! In a hotel where cinema is in every floor, there is of course a screening room, as an extra to all services expected in a 4 star hotel: lobby, bar, fitness room.